Gmorning, Gnight! little pep talks for me & you by Random House 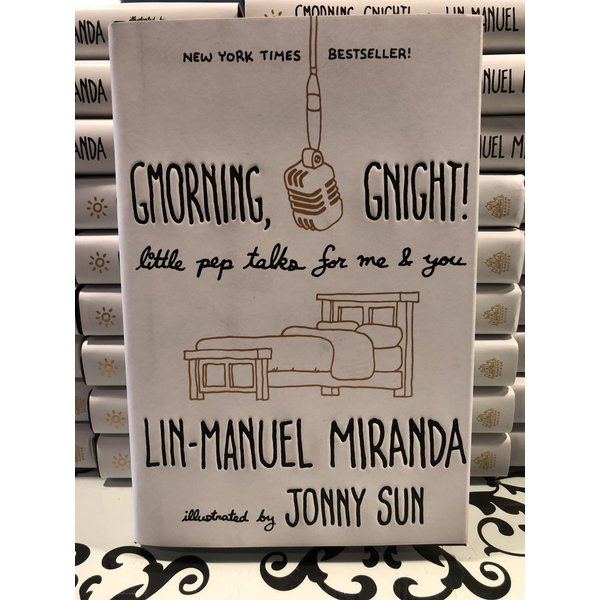 Have trouble getting out of bed in the morning? The relatable and inspiring words in award-winning composer and playwright Miranda's book might infuse a little positivity into your a.m. routine. This volume contains a little more than 200 pages of concise pieces of advice with which to start or end the day. Readers can tear through this book in a single sitting or digest it slowly-they may wish to savor the volume by reading a single "pep talk" in the morning and one at night. Miranda's words, accompanied by Sun's comforting, spare black-and-white illustrations, warrant reexamining. The writing evokes the language of mindfulness, with lines like: "Give that maelstrom in your head a place to land." VERDICT For those who enjoy self-help and psychology texts and meditation books. The brief, meaningful pep talks are lyrical vignettes and may appeal to poetry readers as well.-Emily ­Butler, Deerfield Academy, MAα(c) Copyright 2011. Library Journals LLC, a wholly owned subsidiary of Media Source, Inc. No redistribution permitted.

“When the world is bringing you down, Gmorning, Gnight! will remind you that you are awesome.”—Booklist

Lin-Manuel Miranda is an award-winning composer, lyricist, and performer, as well as the recipient of a 2015 MacArthur Foundation Award. His musical Hamilton won the 2016 Pulitzer Prize for Drama and earned a record-breaking sixteen Tony nominations, winning eleven Tony Awards. Miranda’s first Broadway musical, In the Heights, received four 2008 Tony Awards. He contributed music, lyrics, and vocals to several songs in Disney’s Moana, earning him an Oscar nomination and a Grammy Award for the original song “How Far I’ll Go.” He stars alongside Emily Blunt in Disney’s Mary Poppins Returns. Miranda lives in New York City with his wife, sons, and dog.

Jonny Sun is the author and illustrator of everyone’s a aliebn when ur a aliebn too. Named one of Time’s 25 Most Influential People on the Internet in 2017, Sun is currently a doctoral candidate at MIT, an affiliate at the Berkman Klein Center for Internet and Society at Harvard University, and a creative researcher at the Harvard metaLAB. His art and illustrations have been exhibited at MIT, the Yale School of Architecture, and Artspace New Haven. His comedic work has appeared on NPR and in Time, BuzzFeed, GQ, and McSweeney’s, and he has been profiled in The New York Times Magazine.

was added to your shopping cart